Does stir frying destroy the cancer-fighting properties of glucosinolates? 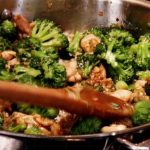 (Naturalhealth365) Glucosinolates may not be a word that rolls easily off the tongue. But, the presence of these natural phytochemicals is what makes cruciferous vegetables like Brussels sprouts and broccoli such cancer-fighting nutritional superstars.
And, while stir-frying is a popular method of preparation, concern exists over whether this cooking method can deplete disease-fighting compounds. In a recent study, researchers set out to discover whether glucosinolates in two different cruciferous vegetables could survive the process of stir-frying, with their beneficial qualities intact. (the results were surprising!)

To conduct the study, which was published in December in Plant Foods for Human Nutrition, researchers prepared red cabbage and pakchoi (also known as bok choy) by cutting off the stems and chopping the leaves into 1 to 2 centimeter strips. They then stir-fried them in sunflower oil – using pan temperatures ranging from 160 to 250 degrees Celsius, and cooking times ranging from one to eight minutes.
They found that stir-frying the vegetables, even at the highest temperatures and longest durations, did not deplete them of their glucosinolates – including glucobrassicanapin, the most abundant form.
The team reported that stir-frying inactivated myrosinase (a substance that breaks down glucosinolates) thereby helping to prevent their release and loss.
While stir-frying left the phytochemicals intact, the researchers noted that earlier studies had shown that cookingcruciferous vegetables in water (by boiling) led to the leaching out and loss of water-soluble glucosinolates.
The team also cited an earlier study that showed that deep frying caused cruciferous vegetables to lose up to 84 percent of their glucosinolates.
The takeaway: Unlike boiling and deep frying, stir-frying will not cause loss of beneficial glucosinolates.

Glucosinolates fight cancer by a multitude of actions

Red cabbage and bok choy belong to the Brassica family of vegetables, which also includes broccoli, kale, Brussels sprouts, arugula, cauliflower, watercress and mustard greens. All Brassica vegetables are rich in sulfur-containing glucosinolates – which break down into biologically active isothiocyanates, including sulforaphane (more about sulforaphane’s amazing abilities later).
Isothiocyanates from glucosinolates have been found to protect cell DNA against potentially cancer-causing mutations, and to cause apoptosis – or programmed cell death – in cancer cells.
In addition, they detoxify and neutralize carcinogens in the body, while inhibiting angiogenesis – the cancer-promoting growth of blood vessels that nourish tumors.
And that’s not all – the “skill set” of glucosinolates also includes the ability to reduce inflammation, regulate blood sugar, support cardiovascular health and promote weight loss.

In a study published in Toxicology and Applied Pharmacology, researchers found that broccoli and watercress suppressed the production of cancer-promoting enzymes known as matrix metalloproteinases, thereby limiting the invasiveness of breast cancer cells.
And, additional research published in Integrative Cancer Therapies confirmed that glucosinolates can protect against harmful reactive oxygen species. Plus, epidemiological studies show that the consumption of Brassica vegetables can lower cancer risk.
One analysis used data from the Nurses’ Health Study to demonstrate that women who ate more than five servings of cruciferous vegetables a week lowered their risk of lung cancer.
And, in a review of 94 studies published in Cancer Epidemiology, Biomarkers and Prevention, researchers reported that a higher intake of cruciferous vegetables was linked to a lower risk of cancer – particularly cancers of the lung, stomach, colon and rectum.

One type of isothiocyanate – sulforaphane – is impressing researchers with its antimicrobial, anti-inflammatory, anti-aging and anticancer properties.
When it comes to sulforaphane content, broccoli sprouts tower over all other cruciferous vegetables, including fully grown broccoli. (Studies have shown that 5- to 6-day old broccoli sprouts contain over 100 times more of this cancer-fighting phytochemical than mature plants).
Studies have supported sulforaphane’s ability to combat cancers of the breast, prostate, bladder, ovaries, liver, colon and lungs.
Amazingly, sulforaphane appears capable of “switching on” the genes that produce beneficial detoxification and antioxidant enzymes. In fact, sulforaphane can sharply boost production of glutathione – the body’s “master” antioxidant, and an important cancer-fighting enzyme in its own right.
A study conducted at the University of California at Santa Barbara found that sulforaphane inhibited the growth of human breast cancer cells, causing researchers to praise it is a “promising” protective agent against breast cancer.
Finally, an additional study conducted at Johns Hopkins University supported the ability of sulforaphane in broccoli sprouts to inhibit the growth of four different types of human breast cancer cells – a truly encouraging result.
No doubt: the beneficial effects of glucosinolate-rich broccoli sprouts, and other cruciferous vegetables, are far too important to ignore. Consuming healthy amounts of these veggies – whether raw or stir-fried – should constitute a significant part of any cancer-preventive program.
Sources for this article include:
Springer.comNIH.govResearchGate.netNaturalHealth365.comNIH.gov

Natural Health 365 is a premium source of trending and popular health-related news, science, testimony & research articles on the most up to date and relevant natural health information. The Food & Nutrition articles found herein are meant to inform and advise our site visitors on eating healthy, nutritious foods and safely using supplements and vitamins to achieve optimal health.
Join thousands of daily visitors staying informed and involved on Natural Health 365! We seek out scientific solutions with proven results and it is our mission to keep you informed! Articles range in topic from the cancer fighting qualities of Olive Oil, to the remarkably high concentration of anti-oxidants found in blueberries, to how to make your own almond milk, to a nutritional comparison of organic vs conventional produce, to an analysis of the health benefits of tree nuts. You can find all of the Food News Articles here
Posted by concerned heart at 10:38 AM